Tuna fishing seems to be right where it should be right now. Plenty fish in all different directions, some days they bite like crazy and some days you got to talk them into it. This particular trip was on Friday the 11th of July. I had plans for catching plenty live bait at the floaters but they were being stubborn and we worked way too hard to catch about 8-10. When we arrived at our drillship, it looked lively. Tons of small tuna on the surface and some nice ones busting in the distance. Within 2 minutes, a nice 80lb tuna skies on one of our baits and we’re hooked up. 15 minutes in we see the fish under the boat at about 50 feet and for no apparent reason the fish spit the hook. No big deal, set back up and hook up again. This time it’s a real fish, mean too. He made a few nice long 100yd plus runs. Almost an hour later, we put 2 gaffs in a fat 125 lb yellowfin. After the long fight, things at this spot slowed down so we moved on. Next spot was dead so we pressed on. This spot was full of fish on the finder but they weren’t really interested in the live baits. Pretty soon into the first chunk drift we hook and land a nice 60lb tuna. On the next drift, the fish started busting so we set out a live bait and it gets hammered quickly. This looks to be a nice fish taking about 200 yards on the first run. We get harnessed up and settle in for the long fight. Shortly after this fish spits the hook. More bad luck so on to the next spot where we start chumming and before you know it we have a 75lb tuna swimming around the boat. He ate a chunk within 10 feet of the boat and we’re hooked up again. While fighting this fish, a nice mahi mahi swims up to the boat eating chum so I fed him a chunk and we’re doubled up. Once again the tuna throws the hook but we land the nice 30 lb dolphin. Frustrated by the 3 lost tuna, we  headed north and picked up some beautiful 13-15 snapper before heading in. 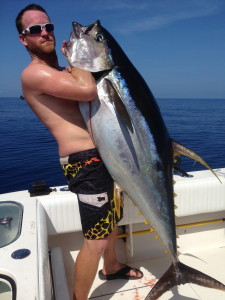 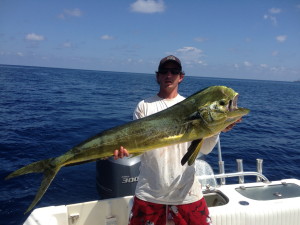 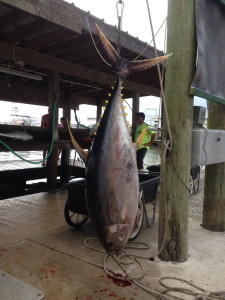 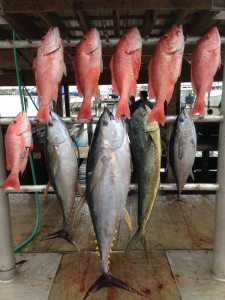