The tuna fishing lately has really gotten consistent. We’re finding tuna in almost all directions out of Venice. We got out May 24 in search of tuna. With good weather and lots of fishermen out on Memorial Day weekend, I had plans of running long to get away from the crowds, but our first stop only 20 miles out was so full of fish, we couldn’t leave. We caught 2 big blackfin immediately that would later turn into bait. After they stopped biting on the troll we were able to catch some nice live baits off of the rig. With fish jumping all around and a great looking sonar screen, I thought the live bait wouldn’t last 5 minutes. Turns out we soaked livies for an hour and a half with only one bite that we missed. Next, I pulled out a blackfin and started chopping hoping to turn him into a yellowfin. First chunk bait in the water resulted in a 65 lb yellow. From then on we were getting 1 or 2 bites on every drift slowly putting fish in the box. We lost a few fish including one nice one, but finished with 6 yellowfin before we decided to fish for something else. Next stop, we dropped down some baits 1200 ft to the bottom. We made 2 drop and caught 2 beautiful barrelfish, that made for a great dinner for the guys. On the way in we stopped in state waters for some red snapper. It took a little while to find out exactly where they were hanging but we proceeded to limit out quickly on nice 8-12 lb snapper.  Oh I almost forgot, we came across a gorgeous blue to green rip line on the way in. It looked to good to pass up so we trolled it for a while but only found chicken dolphin. We grabbed 10 of those for the dinner table. 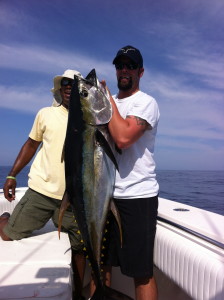 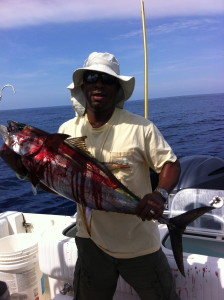