April 19th we awoke to windy conditions and a rough sea forecast. Some other trips cancelled but my guys came a long way and I knew we could make something happen. The wind was supposed to let up some as the day went on so we took our time getting out and stayed close. On our way I found some pelicans diving and that usually means pogies so I quickly filled the livewells with those. At our first couple stops that have had tuna lately were covered in a nasty  current that made them almost unfishable. We gave it our best effort and managed to pull off an almaco jack and a lesser amberjack but lost a couple amberjacks to the rig. I knew we needed to get past the current so we headed south and finally found some good water. We immediately had a double hookup on the troll and caught a small yellowfin and a blackfin. Good start. They turned off on the troll so I put out some live baits. It didn’t take long before we were hooked up with a nice yellowfin. 15 minutes later we had a nice 65 lber in the box. After that fish everything seemed to slow down except for the sharks. With the rough seas we decided to stay put and see if the fish would come up again. The fish never showed themselves again and we were able to catch 2 more blackfins trolling before we headed to the dock. 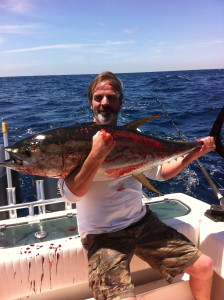 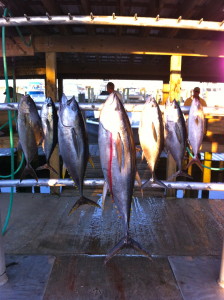