Saturday, February 8 was rougher than forecasted so we decided to focus in on one area because our mobility was limited by the stiff east wind. We picked up a nice 50lb wahoo pretty early on a purple Bomber. With no more action on the troll, we started dropping jigs near the rig. We had plenty of action on almost every drop from a few different species: amberjack, almaco jack, lesser amberjack, and my favorite, the scamp grouper(best eating fish in the Gulf of Mexico in my opinion). After a few breakoffs in the rig, I figured there must be some big ajs down there so we broke out the heavy conventional tackle and dropped down some big dead baits. Almost immediately we hooked up and landed a 64 lb amberjack. After filling our limit of amberjack, we went back to trolling and landed another nice wahoo before heading in. 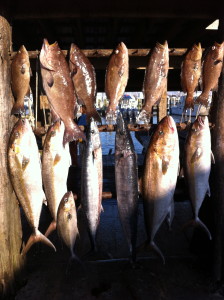